Mezcal is the most famous distillate of fermented must of Agave, known as the "magic plant", it is produced in seven states of Mexico: the main area, which boasts almost 60% of production, is the region of Oaxaca, south of the state, but is also produced in the Guerrero, Guanajuato, San Luis Potosi, Zacatecas, Durango and Tamaulipas regions.

The name Mezcal takes inspiration from the Indian idiom "METL", given to the agave of these territories in order to identify the fertility of this plant, essential for the peoples who used it as a source of water, sugar, fiber and to make tools, food for animals and even fuel.

The main feature of this beloved distillate is the capability to release an articulated bouquet of floral, fruity and spicy aromas with a rustic, rich and enveloping flavor, in stark contrast to the topography of the regions of origin, far from fertile.

The soils, mainly poor and mountainous, have hindered the proliferation of crops, but have also prevented intensive cultivation and massive production over the years anchoring the entire production cycle to manual processing. The cultivation on the terrace is the most used and, for the rarest varieties (the "espadin" agave is considered the most valuable), the yield per hectare does not exceed 400 agave plants; in some blends it is even possible to find wild agaves.

The most popular agaves: 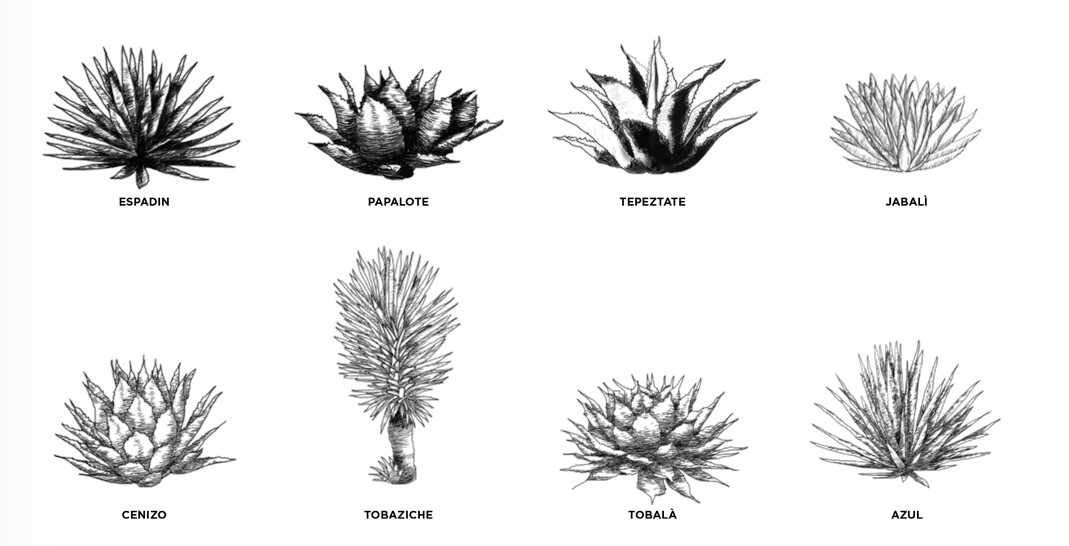 Since production is not regulated by a specification that establishes which species of plant to use, the variety of flavors that can be obtained is potentially infinite. We therefore find the fruit products of particular mixtures of agave, other ar processed pure, obtained from agave Espadin or Tepeztate, Tobala and many others.
Value and quality grow with the increase of the years of the plants before be cut; if we calculate that more than 200 types of agave have been cataloged in Mexico, we can imagine how many products we could potentially find, and how many combinations and differences can be experienced between them.

To protect the consumer on the quality and typicality of the distillate, the final product must pass the strict controls of the Consejo Mexicano de la Calidad Regulador de Mezcal, established in the 90s.
.
.

The process of production:

Mezcal is produced with the central part of the agave: the laborious process begins with the selection of the plants, which occurs when the agave reaches the suitable conditions and the desired years of life, generally between 8 and 12, and sometimes, for special productions, even 20 - 25 years. Once harvested, the leaves are removed, leaving only the heart, which is called piña due to its characteristic appearance.

The roasting of the pine cones takes place in very long times that normally last four or five days, but can last up to an entire month. The roasting is carried out inside the characteristic underground ovens: holes surrounded by volcanic stones and covered with agave peels and leaves which act as a protective layer. This type of cooking, in direct contact with the earth, gives the magical smoky smell and sharp aroma to the future Mezcal, it is subject to the choice of wood and the time in which the fruit is left to smoke, strictly in balance with the sweetness, the spicy and fruity aromas of the plant from which it has been originates.
.

At the end of this phase, the pinecones are pressed, which can be carried out directly by the peasants, or in rudimentary mills that use millstones (tahona) still today often operated by donkeys. The extracted juice, the must, is collected in wooden vats that initiate fermentation, which is then finished in copper, clay or steel stills. The process generally lasts between 36 and 72 hours and can be carried out several times for more refined products in order to obtain a softer and more velvety flavor.
In the last phase the distillate is left to rest in large wooden barrels, during this period it acquires a color that goes from golden to brown. The aging process has three distinct denominations:

Añejo - aged for at least one year, in barrels of no more than 200 liters;
Reposado - aged for a period of two months to a year;
Blanco - clear, stored less than two months:
Most companies do not produce aging products, but only the white version. Since 2005, each distillery, regardless of its size, has had an identification number (NOM), placed on the label of the bottles, which makes it possible to identify the origin of the product.

The phases of the production process:

CULTIVATION AND HARVEST
The process begins by cutting the leaves and roots when the agave reaches maturity (from a minimum of 8 years and up to 30 years depending on the type of plant), leaving only the heart, called "piña" (which means pineapple in Spanish) this because of the similarity with the fruit.

COOKING, TOASTING
The piñas are cut into pieces and baked in a natural underground oven on wood and stone. This step lasts from 4 days up to 7 days depending on the quantity of agaves.

GRINDING
The cooked fragments are again cut and placed in a millstone. The stone is pulled by a horse or donkey, grinding and extracting the juice of the agave pieces. The agaves are rigorously ground by hand with wooden sticks in case the ancestral methodology is followed.

FERMENTATION
The ground agaves are placed in wooden vats with water, allowing them to ferment using only 100% natural yeasts and microorganisms (no chemicals are added).

DISTILLATION
The fermented product, called “tepache”, is distilled several times in copper or terracotta stills, creating the final result: mezcal. In some cases the mezcal is then placed in oak barrels and left to age for a defined period of time (reposado).

.
.
.
Mexicans drink Mezcal straight, often accompanied with a slice of orange, lemon or lime and with a pinch of chili powder or "sal de gusano", in Europe it is increasingly used as the main ingredient of sophisticated cocktails: we leave the choice to you!
.